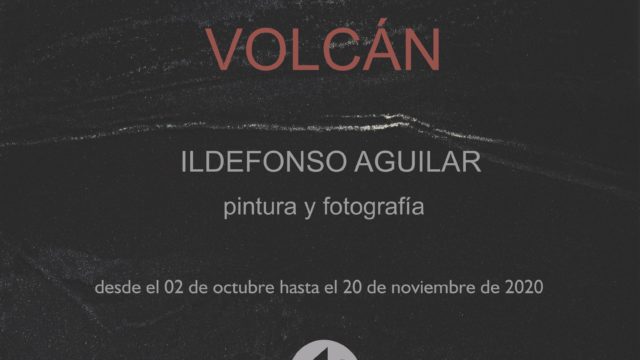 Lanzarote Art Gallery by Eduardo Fariña Art Collector, is pleased to invite you next Friday 2nd October from 19:30 to the opening of the exhibition

He was born in Salamanca in 1945 and has lived in Lanzarote since he was eight months old. Between 1963 and 1968, he studied and graduated at the Santa Cruz de Tenerife Graduate Fine Arts School as a Drawing and Painting Professor. Between 1970 and 1976, he worked as a Drawing and Modelling Professor at the Arrecife Applied Arts and Artistic Trades School in Lanzarote. During that time, he worked on several audiovisual projects about Lanzarote, using photography, sound and video. In 1978, 1979 and 1980, he travelled to different countries working on audiovisuals and music recordings. Between 1968 and 1985 he worked as director of the Cultural Area of the Cabildo of Lanzarote. From the very beginning, he has designed the musical ambiance for the Art, Culture and Tourism Centres of Lanzarote, Jameos del Agua, Ruta de los Volcanes, Cueva de los Verdes and Jardín de Cactus. Since 1986, he has exclusively focused on art and has collaborated as a consultant for different cultural and artistic projects with different public institutions on the island. In 1989, he started the Lanzarote Music Festival and has worked in it ever since. In 1993, he was commissioned by the Cabildo of Lanzarote to become the artistic manager of the Ruta de Janubio landscape recovery project, designing a light and sound installation in the crater of Golfo. In 1999, he completed and finished the second phase of the Art, Culture and Tourism Centre Casa del Campesino, initially created by César Manrique. In 2012, he was appointed Academic Numerary member at the San Miguel Arcángel Royal Fine Arts Canarian Academy for the Painting Section, and in 2015, he was awarded the Golden Medal by the Government of the Canary lslands. In 2016, he was appointed Consulting Board honouring member of the Art, Culture and Tourism Centres of the Cabildo of Lanzarote and named Son of Lanzarote. He has edited catalogues, books and photograph books, as well as musical recordings. In addition, he has designed original graphic pieces for posters, books and albums. Since 1964 he has held individual ongoing painting and photography exhibitions, as well as interventions in the landscape, multimedia installations and audiovisual projects.

The exhibition features a selection of works curated by Ildefonso Aguilar, an exhibition dedicated to consolidated contemporary art, This is an exhibition of art, aimed at art lovers and national and international collectors. We take this opportunity to bring one of the most established artists in the art of the islands and in particular of Lanzarote.  A great occasion to transmit our message as a Gallery and to show the artist of our environment.