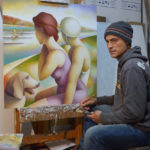 Fabio Hurtado was born in Madrid, Spain in 1960. He’ s graduate at The Fine Arts Faculty of Madrid University. In 1982 left home and rented his first studio. Three years later worked as a teacher in several art school providing financial stability to indulge in his passion for the arts including photography and cinema, one of his main sources of inspiration. In 1988 Hurtado dedicates himself entirely to painting after a successful one man show in Germany.

From that moment on, his presence in international art circles has been constant, participating in solo and collective exhibitions in Europe and USA. Until 1994, his compositions were marked by a geometric and sculptural application in his figures. From then on Hurtado placed figures in exteriors, resulting in a more real and humanistic approach.

From 1996 his international recognition grew and he was appointed membership in the Academic Senate by the Rome Academy of modern Art. The pretigious Financial Times Telecom magazine dedicated a cover page to one of his paintings and Queen Sophia of Spain presented him with a Medal of Honour at the BMW Paintings Awards.

Since then, he has worked simultaneously with American and European galleries, participating in live television interviews and documentaries about his work.

Hurtado was also invited to exhibit in a show celebrating the 25th Anniversary of the Spanish Constitution together with some of Spain’s most important artist. This year the Spanish Postal Services issued a stamp collection featuring six of his paintings celebrating the role of women and literacy throughout history.